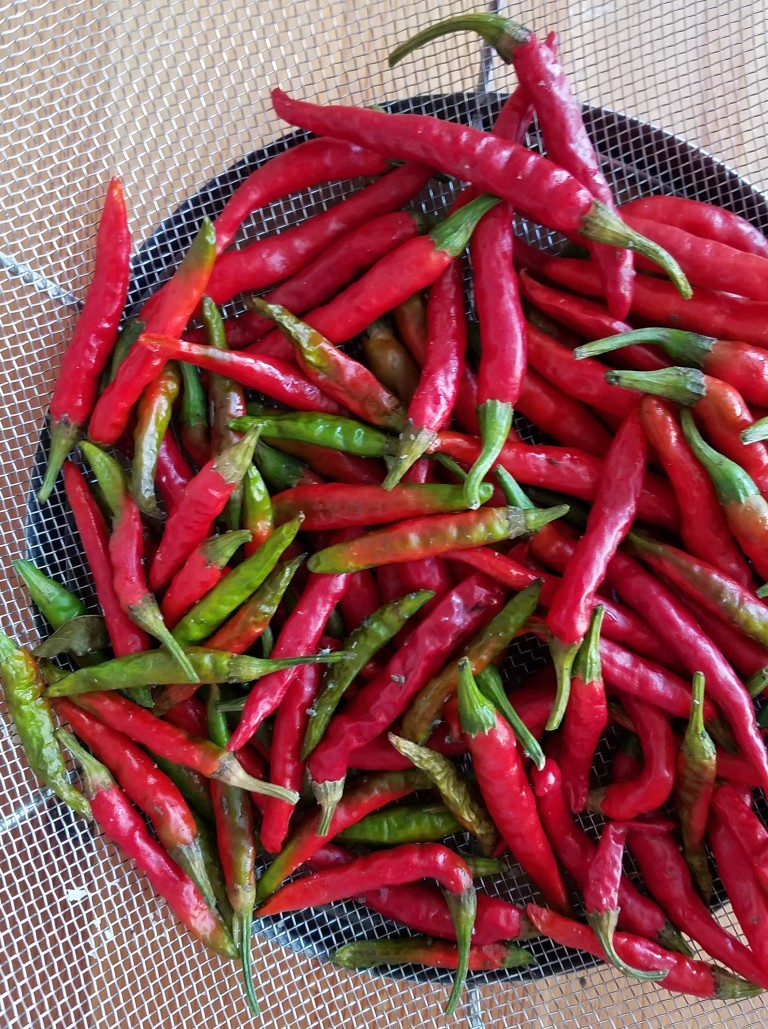 I’ll be honest, I’m not a big hot sauce fan.  I don’t like overly spicy things, I don’t love the flavor of peppers in general, and I have a pretty low spice tolerance.  Despite this, we’ve been growing a lot of peppers in the garden this summer, and I’ve made a strong effort to not only try, but fully embrace peppers as part of my diet.  I’ve had some high and low points on this pepper-eating adventure, but overall I think I’ve made great strides in appreciating the powers of a pepper.

One of the plants in the garden is one that we inherited from the previous owner.  My boyfriend, Chris, joined a community garden this summer, and one of the rogue plants that was hanging in there when he got his new plot was a Thai Dragon (or Thai Chili) Pepper.  We let it stay in its home and worked around it, and the plant really began to take off once it was being watered and properly cared for.

Let me tell you, friends, this plant was a producer.  My guess is that the one plant produced around 50 peppers, maybe even more.  After a quick Google search, we learned that these peppers had the potential to be HOT.  Imagine my apprehension to even go near these things.  It was there, and it was real.

I left the first batch of peppers that we harvested on my counter to dry for a couple of days (I live in Bakersfield, anything will dry out quickly in this desert air).  I broke off a tiny piece of one and sampled it, and to my surprise, it was not that bad.  Some heat, but also balanced with a fruity and vegetal note that I found interesting and pleasant.  Maybe this wouldn’t be so bad after all.

The remaining harvest I saved in the refrigerator in a plastic bag over the course of the next few weeks.  After all of the peppers had been picked, I decided to make a chili paste to preserve their unique flavor.  I was inspired by a recent Instagram post by Tyler Florence, where he made a chili oil with his remaining pepper harvest.  The recipe below is based on his description in his post, and it worked really well!

I have been eating this all weekend, and that’s coming from a girl who is still learning to like peppers.  This recipe is complex and full of great flavor – awesome in soups and stews, mixed into fried rice, or a topping for grilled meats or roasted veggies.  Versatile and delicious – you should make it!