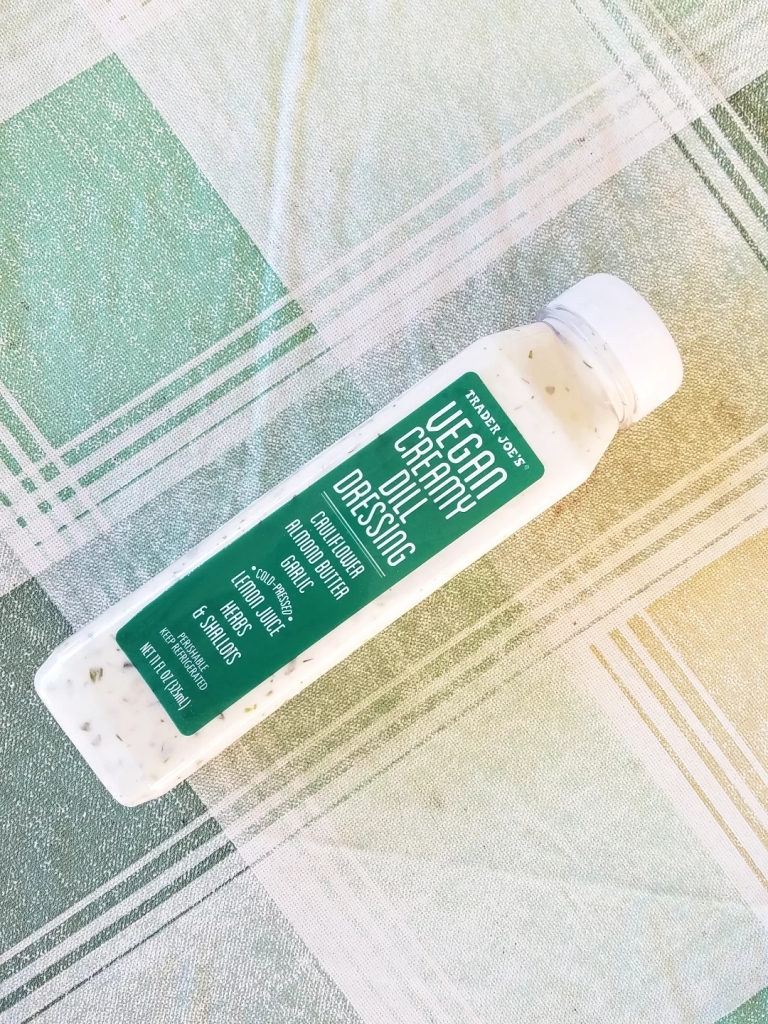 I was really interested in their use of cauliflower in the base, which I haven’t seen before in any salad dressings out there, including the other products in the Trader Joe’s dressing line.  I thought this was a really smart addition to a creamy vegan dressing, as it would provide that beautiful white color and light creamy texture to the dressing that typically is achieved by emulsifying oils or using heavy coconut milk in other vegan dressings.  The combination of cauliflower and almond butter works really well to provide that creamy texture while keeping the dressing light (only 60 calories per 2 tbsp serving!), and is enough to hold it all together even when mixed into a big salad.  No separation in the bottle or on the lettuce, even if the dressing is poured onto the lettuce and eaten at a later time (no problems on my lunch salads all week!).

While the texture is absolutely delightful, I have to say, the flavor is really where it’s at.  The dill flavor absolutely shines through, and there is a good garlic flavor as well giving this dressing a nice punch.  It delivers a lightly ranch flavor profile, with slightly more garlic and stronger dill.  As a huge fan of dill, I really like the flavor profile of this dressing, and I would recommend it to fellow dill fans.  The flavors have been strong enough to stand up to a variety of lettuce options (I have tested this so far with romaine, arugula, and spinach), and I can confirm that it tastes great on all of these salad bases!

Now that we’ve confirmed that both the texture and the flavor are all good, you might be wondering – but how would I use this?  As I mentioned above, this dressing works really well with a variety of lettuces, and I think it would hold up nicely to any veggie-based toppings (roasted vegetables, radishes, tomatoes, etc.).  I would hesitate to use this in a salad that contains any fruit as a topping (like an apple or a pear), because I would be concerned that the garlic flavor would overpower the sweetness of the fruit.  Anywhere where dill is welcome, this dressing would be amazing.  My first thought goes to smoked salmon or smoked trout, or paired with (or even used as a base for) a chicken salad.  This might also be great stirred into some mashed potatoes for fully vegan take on that dish, or stirred into some roasted cauliflower for a little extra flavor.  Any flavors where garlic, dill, or ranch are involved would be a good match for this dressing.

So, if you see this Vegan Creamy Dill Dressing the next time you are at Trader Joe’s, I would encourage you to pick it up and give it a try!  I’m not a fully vegan person, just someone who is trying to incorporate more plants into my lifestyle and who also just loves to try new food products, so take this review as a seal of approval from a girl who also really enjoys a classic dairy-based ranch.  This post was not at all sponsored by Trader Joe’s or their dressings, just some words from a fan!